Stuck On Stupid About Ground Zero 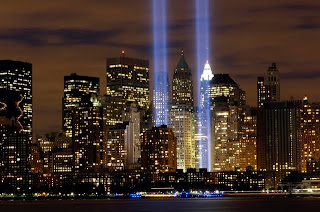 The President of the United States spoke out in support of the right to build a mosque near Ground Zero yesterday - or was it Obama/Andy of Mayberry, giving yet another remedial civics lesson to his benighted townspeople, whipped up into a frenzy over some darn thing:


“This is America, and our commitment to religious freedom must be unshakable. The principle that people of all faiths are welcome in this country, and will not be treated differently by their government, is essential to who we are.”

Much has been written about the opposition to a mosque-muslim center two blocks from Ground Zero. My favorite was this one on Twitter:


I want to know the exact distance from ground zero, in feet, beyond which we're no longer allowed to be ignorant bigots.  I want the number ~ @HunterDK

While all this was raging, we moved into our new home in a newly-built apartment building in lower Manhattan, just blocks from Ground Zero and the proposed Muslim center.  This is a return to the area for me. About ten years ago I toiled for long hours in a law firm near Wall Street.  At that time, it was a neighborhood that you did not want to linger in if you didn't have to. When I came in on weekends, the place was deserted.  I spotted one or two other beleaguered and tired-looking lawyers on the street, but that's about it.  There was a small residential population, but not enough to merit even a single grocery store.  You couldn't buy a fresh tomato in the area even if you had a million dollar Wall Street bonus burning in your pocket.

Now the place is flourishing. The residential population is booming, along with the amenities.  In addition to groceries, restaurants, schools and shopping, several farmers markets have popped up to add bursts of color contrast - red peppers and tomatoes, bright green and yellow zucchini - to the brown-grey cobblestones and historic buildings.  Ground zero is active with construction, not only of the long-awaited but over-produced memorial, but also of buildings promising modern, new office spaces wired from head to toe for the 21st century.  It seems like every day a business announces it's packing up and moving to lower Manhattan.

Ten years was enough time to get over the psychic trauma lingering in the neighborhood from my law firm job, and I moved back with great enthusiasm.  We're gradually getting used to the new digs:  My husband loves the seven-minute walk to work, we're both in awe of our tremendous high-rise view of Manhattan, including the Empire State Building, and our dog Darwin is slowly coming to grips with the fact that there are no grass and dirt facilities nearby.  Our walks turn into historic and architectural tours:  There's Federal Hall, where George Washington, in a low tone so as not to appear overreaching, took the oath of office. The broad steps under Washington's statue are ideal for eating a sandwich on a sunny day while watching people go by.  There's Wall Street, so reviled by America today for running the country into a near-depression and almost ruining the middle class, but still central to the economy of the world and buzzing with excitement when the NYSE bell rings in the trading day. There's the old, revered Delmonico's restaurant, which taught our founding generation how to eat a meal in a civilized fashion.

Then there's the site that is of more recent, and still painful, history, and that is Ground Zero. When I came home from work for the first time after we moved, while ascending the subway escalator at Wall Street I flashed back to the morning of September 11, 2001 when I made that same trip to work, emerging from the subway about 9 am.  I went to the small kiosk as I usually do to get a bottled iced tea. It was run by a Muslim man who knew me as a regular.  He was the one to tell me that morning: "Two planes just hit the World Trade Center Towers." I went out onto the street, looked up, and saw flames shooting out of the towers.  It was alarming and disturbing, but I didn't know what to think, so I went to work.  But soon after I got to my office there was a low, disturbing rumble that suddenly became louder and the sky went out. I didn't know then that one of the towers had collapsed, and the wave of debris thundering past my windows was a crushed mass of building and people. I rushed up to the law library, where many had gathered to watch the news on television, and watched in horror as I realized what was happening.  Then the second tower roared past in a demented black cloud of dust and debris. A nightmare from hell.

Luckily, I was not showered with debris like others who were on the street when the buildings fell, and I did not know anyone personally who may have been in the Word Trade Center towers, the place where I'd get my flu shots every fall.  Still, it was an unthinkable experience - my mind couldn't process it.  My husband saved the voice message I left him to tell him I was okay and that I loved him - the voice was stoic, not hysterical.  The phones went dead but I was able to send an e-mail to my family, letting them know I was still here.  Remarkably, and rather too-conscientiously, I sent a message to our local counsel in Mississippi, attaching the draft legal brief I had been working on, telling him that we were under terrorist attack and that if something happened to me he was to get this brief filed on time.

A partner at the firm came by my office about 1 pm and suggested it was time to evacuate in small groups.  The debris cloud had settled and there hadn't been any new explosions.  One of my friends, eight-months pregnant, had a long walk back to Brooklyn ahead of her.  Some of us going north went out together, handkerchiefs at our mouths.  What we saw was truly that of a science-fiction movie.  Nothing but thick ash and debris and no one around but the national guard and police speeding in on buses and jeeps.  We slowly made our way up the East River. I saw the magnificent Brooklyn Bridge still standing and my heart leapt with joy that they hadn't destroyed it. Looking back we saw the giant plumes of black smoke against that pristine blue September sky.  Still no tears or cries - we were silent.  Finally, just past Canal Street in Chinatown, the subways started to run again, and I was able to make my way home to our apartment in Times Square.

I somehow had the wherewithal to go shopping for water and supplies in case the island of Manhattan was shut down.  But after I got home, for two days all I did was stare at the television, reliving the collapse over and over.  My husband told me this was not a good thing and that I should go out.  The museums in New York, in an act of grace, opened their doors for free that week.  I went to the Museum of Modern Art and sat in front of the large panels of Monet's Water Lilies, immersed myself in the wash of deep blues, greens and pale pinks, and began to feel restored.

That was my experience, and each New Yorker has his or her own story. I won't even go into how I had to return to work the next Tuesday, computers working on generators as our only lights, trying hard to churn out urgent legal work in the midst of a pungent, choking haze of burning plastic, metal and bodies. We all got through it.  Well, some of the secretaries in the firm decided to never come back.  To take a break, I'd walk the six blocks from my office to Ground Zero and gaze upon the remains of the twin towers, reaching upward like a skeletal hand.  Sure, I hated the stark architecture of the twin towers and wished they hadn't been built - but I didn't want them to be taken down this way, and now the remains are deeply beloved.

With all that past still very much present within me, I have no problem welcoming a mosque to lower Manhattan, just as I welcome any other place of worship to service and give comfort to the people who live and work in the area.  Those of you on the outside who have long disdained New York, who are you to suddenly dictate what should be built in our neighborhood?  And those family members of 9/11 victims opposed to the mosque, I'm sorry for your loss, but don't lecture me about loved ones dying.  I've lost both parents and several other loved ones, but I'm not going to claim the location of their death as a personal cemetery.  All New Yorkers suffered a huge loss that day, when the government failed to protect us and we as Americans finally learned what it means to be under attack.  No New Yorker or American will ever be the same.

We are building a memorial for those who died and we will always honor the incredible sacrifice of the first responders and the ordinary people who became heroes because they died simply for going to their jobs.  But those few who would appropriate the whole area out of a misguided sense of self-righteousness or to advance narrow political objectives are wrong.

As you can see, New York, and especially lower Manhattan, is moving forward, thriving in our country's freedom and the comfort of knowing that our country's ideals of equality and justice govern.  There's much to do.  If a mosque can attract capable and productive residents, go ahead and build it!  All who are smart, talented, skilled and forward-looking, you are most welcome. We do not discriminate based on religion, but rather on skills, intelligence and a broad worldview.  Those who are stuck on stupid, who have, in effect, let the terrorists win by forcing us to abandon our core constitutional values, please get out of the way.  We're too busy for this nonsense.

Read George Washington's magnificent, brief speech given in 1790 to a Jewish community in Rhode Island on the subject of religious freedom.