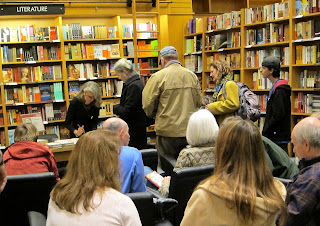 First a shock and then a rush of blood to my chest - a physical sensation of loss.  What? The Barnes and Noble at Lincoln Center is closing?  That can't be! Where will we go to check out the new books first-hand (even though we sometimes end up buying them on Amazon)?  Where will we go for cards, gift-wrap, maps, magazines and calendars?  What about the wonderful book signings, where I met my favorite theater director, David Cromer, and had the whole cast of Our Town sign my new hardcover copy of the play, after they performed a scene and generously answered questions from the audience?  Where will I arrange to meet friends, if not "on the first floor of the Barnes and Noble, Broadway side"?

It was more than a bookstore. It was a place where people came together - to buy books or just browse around and chat.  It had become as essential to the community as a city park or other public destination.  And it was leaving us.
I recall when I first started going to this particular Barnes and Noble.  It was when I was a law student at Columbia.  This was a second career for me, so I was way older than my classmates, which meant no dates on weekends except with the X-Files on Fridays.  I would often take in a film at the movie house on 68th and Broadway and then walk a block over to the Barnes and Noble to browse the new hardcovers, look at magazines, maybe get a cup of coffee.  I don't drink - alcohol aggravates my asthma - so I don't hang out in bars.  This was a place I could go to by myself, a safe place, and, most of all, there were books.
At first I was unimpressed.  I'm a snob, you see, having worked in the greatest of all independent bookshops, The Seminary Coop Bookstore, while I was a grad student at the University of Chicago.  We were expected to answer questions with a knowledge of the extensive stock of titles, specialized academic disciplines included, and if we didn't have it, we'd "special order" it.  We did it straight up - no coffee, just books.
But I gradually warmed to the Barnes and Noble.  I recall when I started going out with Mr. H (we are now married and living happily ever after), we went to the bookstore to do research for a trip to Montreal.  I found a lovely little hotel in one of the guidebooks, showed Mr. H the passage, and said: Okay, let's memorize this."  He looked up from the guidebook and said: "You know, we could just buy it."  I burst out laughing.  As a poor student, I was so used to just browsing, it hadn't occurred to me actually to buy the book!
And now we hear that Borders is closing its stores in Manhattan and all over the country, including the one we frequent in the charming town of Saratoga Springs, NY, where we rent a weekend apartment.  We like Borders stores because they usually have a good local history section.  When we travel to different cities, we make a point to stop at the Borders to look for books on the special history of the place, and we usually pick up some other reading for the trip as well.  The Borders in Saratoga is a large brick structure at the center of the main street.  Often, when we're strolling in downtown Saratoga, Mr. H will run in to to get the papers (which we also read online), while I wait outside with Darwin, our black lab.  Darwin and I see all manner of people going in and out of the bookstore while we wait - old and young, hip and nerd.  Musicians are often outside on the sidewalk, and there's a Seattle's Best with tables inside where people chat over books, news and coffee.  It's a festive scene, rich with human interaction.  With the bookstore gone, there will be a huge gap in the texture of the neighborhood. 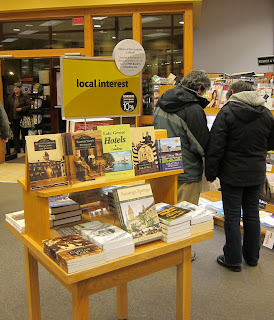 We all understand the economic difficulties in maintaining a physical bookstore when everyone, including me, is reading on iPads or Kindles. But I still buy hard-copy books, and not always online.   Sometimes I can't wait for the mail, I want to have the book in my hands right away.  When Mr. H and I make the 3-hour drive up to Saratoga, we listen to audiobooks from my iPad through the car speakers.  We invariably end up going into a bookstore and buying the same book so we can look at the drawings and pictures and look back at some passages I might have missed while napping.  After all, you can't listen to Endurance, the spellbinding story of Shackleton's adventure in Antarctica, without wanting to see a photograph of the tall ship trapped, surrounded by ice, or hear The River of Doubt, without wanting to see what Teddy Roosevelt looked like writing his articles for Scribner's in the middle of the Amazon jungle sitting at a little portable table while covered up by gloves and mosquito netting.  And you can't listen to these books without wanting to have your own copies on the shelf forever because they are so, so great.
Going to bookstores is part of our lifestyle and they offer a special place for people to gather.  Will physical location become less and less necessary as we become more digitized, so that we don't ever need to leave our homes to bump elbows with strangers over coffee, books and records?  (Don't get me going over the loss of Tower Records).  We may end up like the Krell of Forbidden Planet, who became so technologically advanced that they had no need for physical instruments and withdrew into their own minds, ultimately to destroy themselves and their civilization with their own terrifying monsters from the id.
Well, maybe it won't be that bad, but it is a huge loss.  And I am sad. 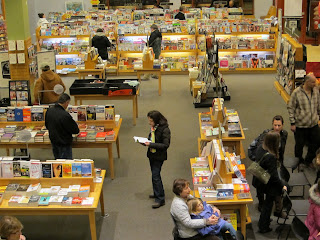