The Thug in the Picture 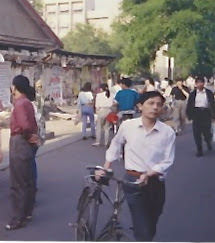 See that guy walking up on the right side of this photo?  The fellow in the dark slacks and jacket.  You can't make it out, but he's carrying a paper shopping bag, one with handles, looking like one of the many casual visitors to the Beijing University campus that lovely spring afternoon in 1994 when I shot this picture.  I was aiming for the bulletin boards, which don't look like much, but they played an important role in modern history as the spot where students pasted notices of political demonstrations.  I thought it would be nice to show to my Chinese literature students back at Oberlin College, who would appreciate their significance.  As soon as I snapped the picture, though, all hell broke loose.

The man with the shopping bag suddenly rushed toward me, yelling and gesturing menacingly. A crowd immediately gathered, then uniformed guards brisling with guns and bayonets surrounded me. You see, Shopping-Bag Guy was a plainclothes policeman, one of those thugs you've been hearing about so much lately who help the Chinese government keep things under strict control while operating outside official law.  You mess with them, they can beat you bloody and have you thrown in jail with no recourse. I knew that an American reporter had just been beaten up by such a thug, and so when he demanded my camera, I immediately handed it over.  Instead of confiscating it, however, he opened the back and pulled the film roll, without taking it out, just to expose it, then he handed it back to me and stomped away.  The crowd dispersed.  The guards, thankfully, went back to their posts.  It was a grim moment to say the least.

I developed the roll anyway, and only one picture survived.  The very photo worth keeping.

I had for many years been immersed in the study of Chinese literature and culture.  I found some truths along the way, but not the truths I expected.  What I discovered was the universal need to be treated with dignity and respect.  What I also discovered was that those in power, obsessed with their own survival, will go to great lengths to make sure that basic human need is not met.

This fundamental truth is being played out in Egypt and Libya right now. Again and again, protesters say all they want is to be treated like human beings instead of slaves in an authoritarian state.  They want respect for the work they do, to be permitted to enjoy dinner with their family without harassment at the end of the day, to express joy when they're happy and speak their minds at injustice without fear of reprisal. They don't want to be treated like animals or like cogs in a machine.

Last January President Hu Jintao suggested China isn't ready for human rights because they are still a developing country.  But they've long been ready.  They've been ready from the time of the anonymous soldiers in the 7th century BC, whose poems complain of unrelenting border wars, to the Tang dynasty poet Du Fu, who lamented that while in exile he was not able to set the emperor straight. And they're ready today as we've seen in the strong undercurrent of political dissent and the detention of the artist Ai Weiwei, the Nobel laureate Liu Xiaobo and so many other human rights activists.

Even local villagers are taking on instances of corruption and abuse.  In tiny Zhaiqiao they rose up in anger when their village head Qian Yunhui, who had been protesting the unjust confiscation of land by a power plant, was suddenly and conveniently run over by a truck.  The village promptly voted his close relative to the post to carry on where the deceased had left off.

If most Chinese are willing to submit to total government control, why does the Chinese government work so hard at silencing voices of opposition?  It takes an enormous amount of energy and resources to spy on what everyone is saying or thinking and blot out any hint of criticism.
When I lived in Beijing, my insignificant mail would arrive with a big piece of Scotch tape clumsily pasted over where it had been ripped open and reviewed.  The government is so obsessed with quashing criticism that it goes to ridiculous lengths.  Even Confucius was not spared in the recent crackdown when his giant statue was unceremoniously removed from Tiananmen square under cover of darkness one night this past week.  Guess they suddenly remembered that Confucius demanded ethical and humane behavior from rulers as well.
The truth I learned in China was that basic human rights, including the freedom to speak up at injustice and abuse of power, were more important than an appreciation of the finest ancient brocade.  I'm now a First Amendment lawyer, protecting the work of journalists to report and criticize government officials and others who affect our lives.  I go to work every day to make sure that our free speech guarantees are preserved and not chipped away.

I have Shopping-Bag Guy to thank.

Posted by Hudsonette at 8:24 PM