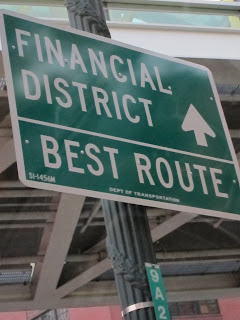 My black lab Darwin and I often walk through Zuccotti Park in Lower Manhattan early in the morning on our way past the World Trade Center, on to the West Street dog park and then around the bottom of the island. Zuccotti Park is better than most privately-owned public spaces - it's prettier and more inviting, lined with trees, filled with flower beds, with cool light panels arrayed on the ground and benches throughout made of nice smooth stone.  On one side are carts for coffee and pastries and fresh juices, and every week a farmers market sets up, adorning the park with rows of colorful produce.

Darwin enjoys nosing about the flower beds and greeting people sitting at tables eating their breakfast, with the ulterior motive, of course, that they share some muffin with him. Sometimes he chases pigeons or looks up at the little birds out of his reach, hidden in trees. We see people sipping coffee, checking their calendars for the busy day, others obviously dressed in their best, too early for their interview, silently running through their presentation or pitch. Then there are groups of robust construction guys, some chatting and laughing for the last few moments of relaxation before the tough job ahead, others drinking coffee alone, lunch box in hand, pensive.

The park is just across from the World Trade Center construction zone, and thus situated at the edge of doom that awful day, receiving the first blow of that terrible cloud of ash, debris and human remains that rushed through the corridors and covered Lower Manhattan after the towers fell.  The office where I worked in 2001 was a few blocks from there, and after the attack I would walk up to where the renovated park now stands to gaze at the skeletal remains of the twin towers, then sitting atop piles of rubble and toxic smoke.

For the last month, the park has become the site of another ground zero, the vortex of the Occupy Wall Street movement, which has spread throughout the country and beyond.  It has transformed into a setting for the quintessential exercise of free speech: pointed criticism at the powers that be for the way they run the country - in particular by ignoring the inequities that resulted after the economic collapse largely caused by unregulated financial markets. But I'll leave it to them to explain. Mostly young people. The park is filled with their passion and hope and the desperate need to be heard. And they speak on behalf of so many who worked diligently but lost jobs through no fault of their own, suddenly saddled with credit card debt, student loans, and unpaid mortgages while the giant two-faced banks show no mercy - taking in hard-earned money on one side, investing in scurrilous financial products on the other. Make no mistake, all of New York City needs our banks and financial markets to be flourishing, but it will not hurt the economic basis of the city to question and critique the process.

The political and cultural debate started in Zuccotti Park will continue for a long time. Who knows if it will change anything? It has engendered a deeply hostile reaction from those with certain established views and old fears. And many residents of Lower Manhattan are not happy that their neighborhood, newly restored ten years after 9/11, is upended again. Police, already a huge presence around Wall Street due to terrorism concerns, have set up new blockades. Individuals having nothing do to with the policies under protest are mistaken for "bankers" and harassed. Families are bothered by the drums and chanting late into the night.

The Occupiers vow to be there indefinitely, and it may be a very long time before Darwin and I get our morning stroll there again. No matter. The park has changed forever. At some point they will leave, perhaps when it gets too cold, so cold that, as in Paul Bunyan stories, the heated words of their debates over economic and social justice themselves become frozen, hanging in the air, until they thaw in the spring, to the astonishment of Darwin, who will look up into the trees and hear the voices of democracy. 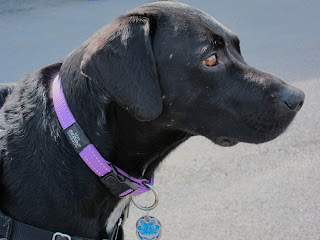